Solutions to installing solar on roof with limited capacity

Building a flat roof implies at least one added difficulty as opposed to ground-mounted solar or tilted-roof rooftop solar (residential): so much ballast blocks will be added on the roof structure to hold the solar panels in place that it can become dangerous that the roof may crumble under the pressure.

Under older versions of the Building Code (both Canadian and American), ballasted low profile systems with wind deflectors could weight as low as 3-4 PSF. Under the new Codes (ASCE-7-16, and NBCC-2015), additional engineering design factors such as Lb, An and building height will massively increase the wind uplift, especially if the solar system does not integrate a wind deflector.
Wind deflectors should be avoided in order to boost bifacial gains and increase panels' cooling. Without wind deflectors, solar PV racking becomes easier and faster to install.
To avoid roof caving in or prematurely degrading, a conscientious solar developer must assess the capacity of the roof to take a dead load varying from 5 to 15 PSF (depending on location, building height and shape).
Since an exhaustive load bearing evaluation of a building is expensive, the complete study is usually done only at the final engineering phase of the solar project, at which point a developer will be heavily invested financially into such given project.
Is a limited roof capacity a death sentence for any solar project? Are rooftop projects doomed to be a money-sucking vortex as soon as roof capacity is limited?
Absolutely not! Opsun can help find solutions to limited load capacity on building, at a proper, reasonable price.

Is the load limited by the deck? or the trusses and joists?

If a building has a weak, or overloaded deck, but the trusses have some capacity, then using a racking structure that only touches the roof (only rests its weight) directly above the building structure (open web steel joists, or OWSJ, usually) is the best system to select. Depending on the direction of the OWSJ, different solutions can arise.

When the roof joists are running North-South, and the racking rails are also running in the same North-South direction, then a simple solution will be to match the solar racking rails spacing on the roof with the OWSJ spacing. For instance, an Opsun racking system can have its base rails placed directly over the building's OWSJ , in such a way that the deck itself will not see much (if any!) loading.
Opsun's racking can easily span from 5-7 feet (traditional OWSJ spacing), and up to 15 feet using Opsun's stronger Sunrail Structure rails to match any building structure.

Assuming the panels are facing South, then the base rails of the Opsun system would also be running from North to South. If the building structure has its beams running perpendicular to the solar racking system rails, and so in this example East-West, then there may be simple solutions to the problem as well.
For instance, Opsun can add another layer of rails under its base rails, in order for the racking system to be only touching the roof directly above the East-West joists. In this way, zero load is applied on the decking and all the load solar system load transfers directly into the joists.
This is called a two-layer system, and the extra cost of the racking will always be less than reinforcing a roof! 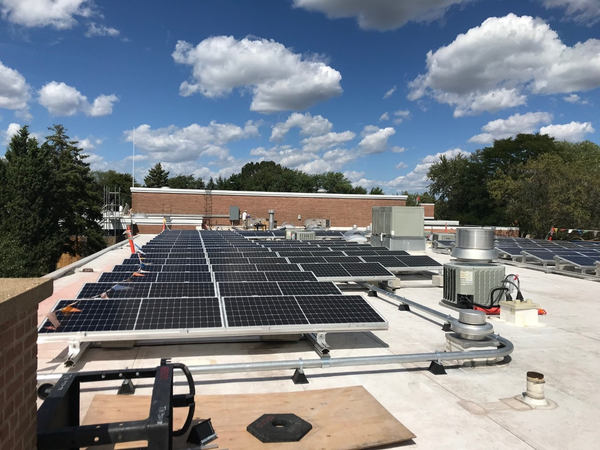 If a two-layer racking system is not desired, and the joists are running East-West, then the solar array can simply be rotated in either direction, so the base rails of the racking system rest directly above the joists (i.e. the racking base rails would run East-West if the joists are running East-West). This is ideal, when the building is already oriented around 45 degrees from the True South, and the array being rotated a direction or another will not impact generation too much.
Since bifacial systems are much less sensitive to orientation than monofacial solar systems, they are an ideal choice for these projects that are not facing True South (a 45 degree South-West facing Bifacial solar system will operate the same way as a South-facing monofacial system, simply because the rays of light that the front of the panels do not capture will be caught by the back face, instead, leading to similar electricity (kWh) generation).

If all of the above can't be deployed in your situation, then the best solution is to mechanically anchor the racking system to the roof. There are several solutions that do not penetrate the roof (U-Anchor and Solar Stack, to name a few manufacturers) that fuse (bond) the anchor's skirt into the PVC or TPO membrane of the roof, or use an outdoors-proven polyurethane adhesive for roofing tiles, respectively.
Though these solutions can be useful to avoid roof penetrations, the safest and toughest systems will use simple screws that drill through the roof membrane, insulation and that fix into the roof deck (usually steel), such as anchors manufactured by OMG or FACET.
An anchored system can be as light as 2-3 PSF, depending on configurations.

If there is absolutely no loading capacity on the roof, and solar is still desired at that location, the final solution will be to bring large steel H-Beams, and position them on the roof so they are resting either on the outer building walls, or on the building's columns, which usually have significant bearing capacity. This will be expensive, but maybe less so than reinforcing the roof, and much less disturbing for the operations inside de building.
A team of specialized engineers will need to design and position these beams, and the solar racking above them, and Opsun has exactly the team you will need to deliver such complex engineering project successfully. 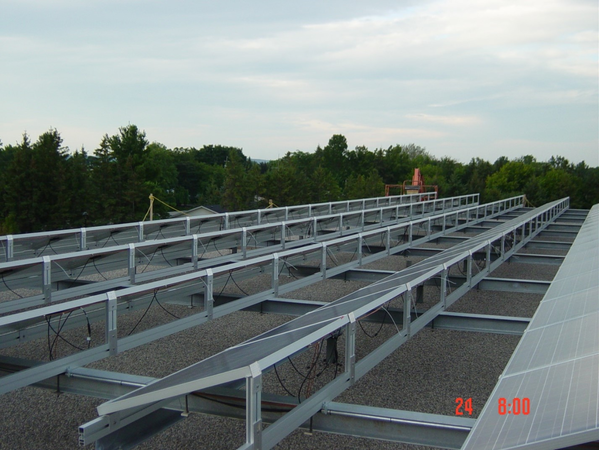 
Whether you are looking to place loads on the joists, use a two-layer system or anchor a solar racking system to a roof, reach-out to Opsun to learn how we can help turn your project on a roof with limited loading capacity from a head-twisting nightmare to a simple, seamless, high-quality solution.